I'll jump right into the update starting with the youngest family member to the oldest. The Doctor, soon to be three year old, is in full terrible twos mode. He is constantly testing limits, telling us No, and generally being a two year old. He is still our sweet boy that is willing to dish out hugs and kisses at any random moment, and frequently wanting to share a sweet treat.

Red Ant, our eight year old, has been accepted into the Gifted and Talented program within our district. This means that while in elementary school he gets "dragged out" of classes for enrichment programs three times per week. They are working with  3D printers, reverse engineering household items, and doing a business model for a candy store. He is still enrolled in Marshal's Art, and I'm really impressed with his progress and natural ability to learn the basics of martial arts.

Row, our eleven year old, is growing like a weed and excelling academically as well. He scored a 99 percentile on the ACT Aspire, which got Duke's Talent Search Department attention, and they are tracking his academic performance. A potential full ride scholarship to a well known university! We have also filled out the necessary paperwork for him to be tested for the Talented and Gifted program. All of his teachers have selected him for AP classes for his sixth grade year. He continues to draw, and has been dying to get a YouTube channel to post his own videos with his brother.

Sweetheart is still running and completed her second full Little Rock marathon this spring, and training for other various races throughout the state.

Both of her parents are having health issues, and we have told my parents that they are not allowed to have any issues at this time. Her mom is having heart issues, while her father has a slew of problems mainly due to non-compliance. We are still teaching financial classes at church, and ready for our summer break. 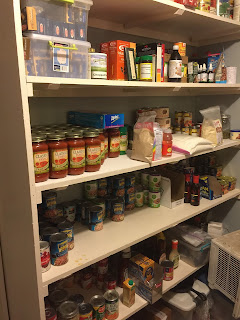 My life has been hard to describe. After officially taking my last test, it seems surreal, that after six years, I no longer have another test or any more schooling on my schedule. I have been toying with taking the HAM radio license, and delving into iOS application programming to build an application of when to buy pantry items at their low price points.  I have already created a spreadsheet for statistical tracking of our state scratch off using limited information and extrapolating the data. Let me know if anyone is interested and I'll put a post together....

My bipolar coworker has gotten on a kick out of calling me a prepper. Either he has been looking over my shoulder which is very real considering his paranoid states or found my blog. Typically, I agree with him and try to blow him off. Yesterday, he asked if he could come bring a cot and stay with my family in the event of an emergency. "Hell no" was my first thought, but politely ran the numbers game that he would reduce our family's resources. Instead of one year's food we would only have about eight months worth. I truly wish I was able to discuss his failure as an adult to take care of himself in the event of an emergency, but that wouldn't be conducive to a good work relationship.

The future of the blog is going to revamped, edited, and trimmed of fat. There will be less frequent posting, but more content if you follow my point. The ways of Monsoon Matriarch, Pioneer Preppy, and Harry Flashman to name a few bloggers.


Future Posts:
I still have a review of .223 ammo from Ammo To Go that needs to trip taken to our local National Forest to finish the write up.
I've also been working on roasting my own green coffee beans, and will have a post about that as well.
A small series on building your own medical kit, on the frugal, for the most common medical occurrences for an EMP event.
Posted by K 3 comments: