I'm a husband. I'm a father to three wonderful, brilliant, and curious boys. I worked in the restaurant industry for over 27 years, all "back of the house". Currently, I'm attending school to be in the medical field and have a 3.80 GPA. I have actively backpacked for well over 20 years. I am also active in my church, and still working on my many flaws. I saw this quote the other day and it sums me up fairly well, "Old too soon, and smart too late". 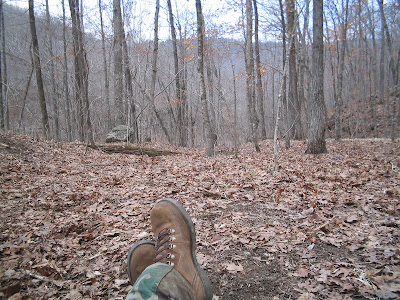 ---Wake up Call or Anyone home?---
I always thought I was prepared for most anything. Last year a thunderstorm rolled through our town, and the power went out. "No problem", as I headed to the bookcase where the flashlight and batteries are stored. I turned on the first flashlight..nothing. Dead batteries. That's okay, I've got those. Nope, no C batteries. I grabbed the second flashlight...nothing. "Oh yeah", the bulb burned out a few months back when the boys were playing with it. I've got a candle in the bathroom, but no lighter or matches since I quit smoking. I could go downstairs and rummage through my backpacking gear, but I don't have a flashlight. Luckily, my oldest son came to the rescue with his Thomas the Tank Engine flashlight from his room. He uses it to find his "stuff" under his bed. How can a five year old be better prepared than an adult? This was my wake up call.

---Taken from one of my first posts---
Why do I prep? Family. It is a fact that accidents, mistakes, and "Oh Shit" moments are going to happen. 100 percent probability. Why not try to minimize the event? I am actively preparing for near unemployment since I am returning to school full time for a career in the medical field. Actually, I'll be working one or two shifts a week depending on the amount of time that school requires. I also believe that inflation is a 100 percent surety. Things are not getting cheaper and my income isn't rising. Given all of these factors, it makes perfect sense to plan, to use some foresight, and to be prepared.

I am also a backpacker. When preparing for trips, I try to think of everything that I might need. It is just a logical extension to include my house and family. I don't expect the government to collapse, or an asteroid to hit the Earth, but I do plan for snowstorms, wage losses, and the power going out. The power grid going out or financial collapse (recession/depression) are my two biggest long term concerns. I lump pandemic, snowstorms, tornadoes, and earthquakes into the same scenario. They are just a few added steps and/or preparations apart. A nearby town was hit by a tornado, and they were out of power for over three weeks. What would you do if the power was out statewide?

I've learned to use extreme coupons techniques to reduce my grocery bill while increasing my stockpile. I shouldn't have to buy toothpaste, toothbrushes, floss, deodorant, soap, razors, and a few other items for at least three years. All of these items were free once coupled with coupons, sales, and a little work. A few of the items, the store paid me to take them out of the store. I am also planting a garden for the first time at this location. It has been a few years since I've gardened, but I am looking forward to getting my hands dirty. Canning will also be an adventure for the family this year too. Harvesting the heirloom seeds will also be on my learning curve this year.

My ultimate goals are to be away from my city and have a country home that is custom designed. Homesteading with minimal grid reliance. This is many years away, but the groundwork is being laid down now.

I do watch National Geographic Preppers series. I'm not very fond of how they show the idea of "being prepared" as a mental disorder.