The largest school district in the state of Arkansas, the Little Rock School District [LRSD], got taken over by the state for academic distress a few days ago. In layman terms, the school district is unable to perform its duties in these days of dumbed down standardized testing. Two-thirds of the district's 30 elementary schools are scoring in the lowest 25% on math exams. The following schools were deemed to be in academic distress: Baseline Elementary School, Cloverdale Middle School, Henderson Middle School, Hall High School, J.A. Fair High School, McClellan High School. Here is a complete list of the schools within the district. The elementary school and McClellan high school are in the little Mexico area of the city, and most students come from a English as a second language home. 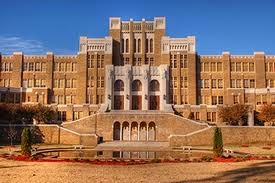 Three of the five LRSD High Schools are in distress [academic distress is when fewer than half of the students attending them scored at proficient levels on achievement tests]. Parkview High School is an Arts and Science Magnet School and attracts the district's best students, while Central High School has two distinct curriculum. The principal of Central High school refers to the non-AP students as "the general population". A term that I associate with prison. The Central High School does offer excellent AP classes, but its like stacking the baseball team with a few ringers to get to the playoffs.

I'll provide the back story for my readers. Pulaski County School District [PCSSD] offered LRSD a chance to combine districts in their early days, and LRSD declined because the tax base wasn't very good for PCSSD. Fast forward many years,and the suburban sprawl takes hold, making the tax base of PCSSD very attractive. The suburban sprawl attracted many affluent white families, ergo LRSD files a desegregation lawsuit in 1982 against the PCSSD and North Little Rock School District [NLRSD]. At this point, the state of Arkansas steps in and infuses huge amounts of money to "fix" the situation. Social engineering. This creates an even greater white flight from the capital city, due to busing, racial tension, and the end of neighborhood schools. The bedroom communities such as Conway, Cabot, Bryant, and Benton explode in growth as a result, and their educational system improves. This creates a positive loop that draws even more families capable of moving, thus leaving the LRSD with the lower socioeconomic classes, usually black. At this point, quality private schools begin to increase in number for the remaining affluent families that can afford to foot the bill for the their children's education. During this time the LRSD goes through numerous superintendents, many lasting only a year or two. I can't find the exact number but 20 in the 25 years seems about right.

The state has throw money at the school system in an attempt to fix the racial inequality, and it hasn't worked. With desegregation funding running out, the district would soon need to cut $37 million to stay solvent. As Arkansas' Central High School was in the spotlight for segregation, we are again in the spotlight for America's educational system.

Email ThisBlogThis!Share to TwitterShare to FacebookShare to Pinterest
Labels: Economics

In response to PP, this is an Arkansas Swimming Pool

This is a real Arkansas swimming pool located at Pruitt on the Buffalo National River.

Some Days You Wonder About The Human Species

We have a saying at our office about the "special" people that we see everyday. We call them "touched". Some days these people are a little more "touched" than others. Today was one of those days. We have dressing rooms with lockers so that they can lock their most prized and precious trinkets. This happens more than I'd care to admit... 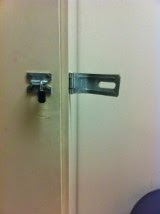 Of course, if it weren't for the warning labels a few of them might not be here today.

In helping the community and our church, Sweetheart and I volunteered to co-lead the Dave Ramsey program at our church. Let's face it. People will have a financial emergency before an earthquake, EMP blast, or a super volcano eruption. The more people that are out of debt and have a firmer grip on their budget, then they will be light years ahead of everyone else. The better prepared that our community is, the better it is for our family. 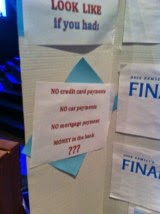 We'll be helping with the 9 week course, and getting back into the program ourselves. We have one credit card that we are hoping to pay off within the next six months. If you are unfamiliar with the program, I've got a link on the top of the page. Check it out, it's what really allowed me to go back to school and get my degree without being saddled with student loans. That and the support of my wonderful wife.

Debt is modern day slavery...except that they don't have to pay for your housing and food.

We were getting ready to leave for school this morning, and I hear Red Ant whispering to Sweetheart that he needs a dollar. I figured it was for school. As I was making one last sweep of the area to make sure no backpacks were being left behind, I noticed that Red Ant had left a dollar by his breakfast area. You see, we have been telling that them that this isn't a restaurant and that they need to clean up after themselves. Red Ant figured out to leave a tip like we do at restaurants. 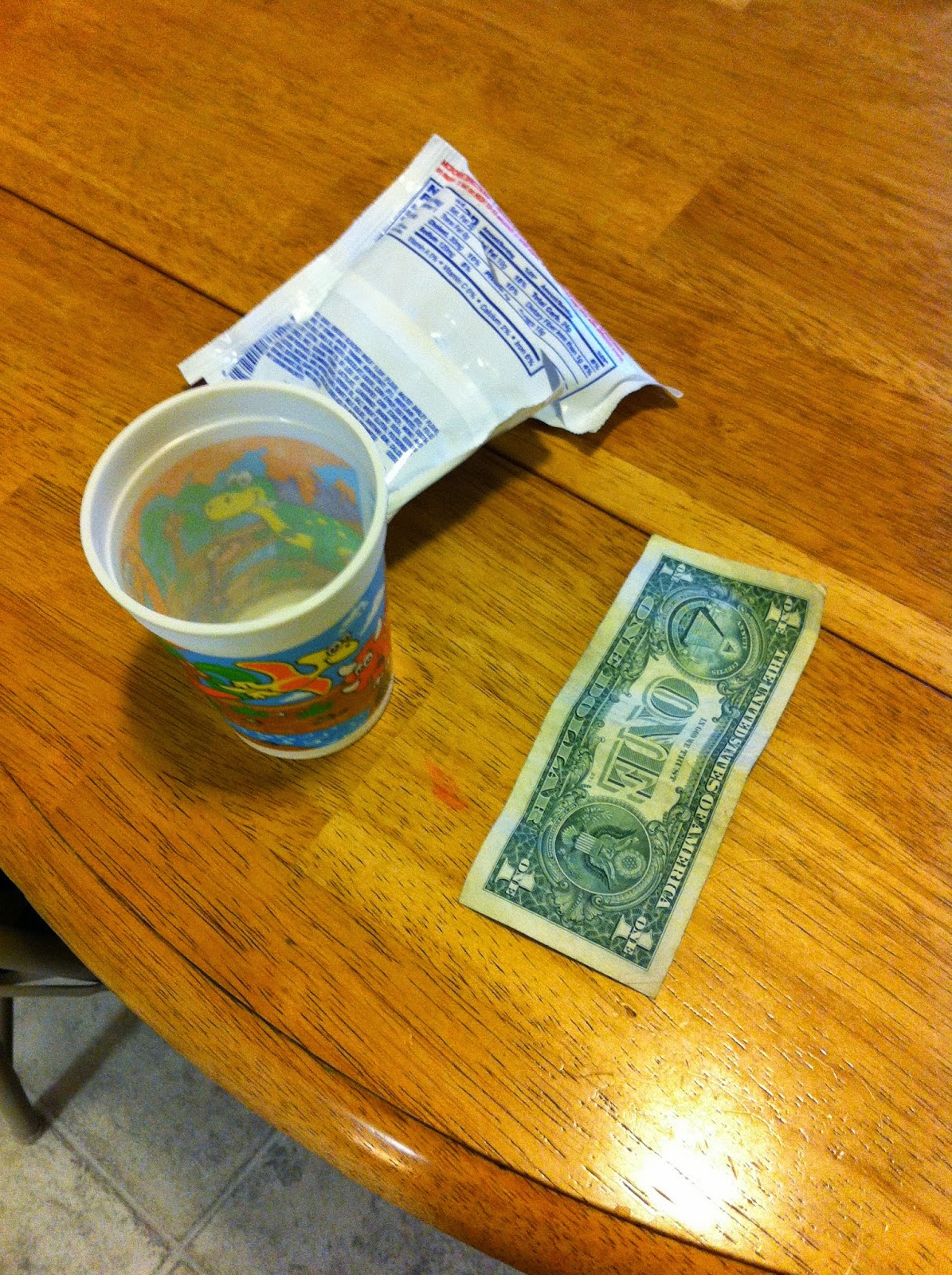 I love my boys. It's always an adventure. I'm sure he won't notice that the dollar is going back into his allowance jar.

Email ThisBlogThis!Share to TwitterShare to FacebookShare to Pinterest
Labels: Kids

In Honor of The State of The Union

I've included a website for more free air! Preferably placed in your car/truck tires rather than into a bodily orifice like the speech last night.

I really hate having to pay for air, especially since I remember when it used to be free! I've provided a link for you to find free air pumps based on your zip code. Use those coins to buy some more preps...

Into The Rut We Go

I had our monthly meeting with the Radiography Group last Sunday, and Ioshua got onto me for not posting in such a long time. Truth be told, I've sat down a few times, but just didn't feel the need to post about Christmas and the daily routine. My wife also pointed out that any regular readership that I have will probably lose interest if I don't post on a regular basis. So....

I used some of my Christmas money to purchase a Faberware Yosemite Stovetop Percolator. 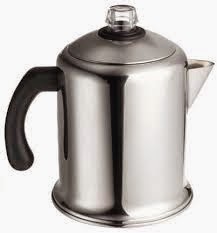 As a twenty plus year veteran of the restaurant industry. I will highly recommend this item. The stainless steel is very thick, and the spindle sits tightly within the percolator. It works like a champ, but remember to turn it down a little after it begins to perk. So, if the power goes out for any period of time, Sweetheart and I will have hot coffee to warm ourselves. Anyone that has followed us knows we love our coffee. The only negative that I can talk about is that the coffee needs to be put into a thermal carafe after brewing. We already have one with our other coffee maker, so no addition purchases necessary.

I'm taking 11 hours this semester. Current Issues In Healthcare, which is a BS class to tell the truth, is an easy A. 8 discussion questions, and a 4 page final  is the entire class course. I've already posted 5 discussion questions within the first two weeks, and plan on having this course put to bed before January 31st, except for the paper and the three responses per discussion. I can write those at a snail's pace over the course of three months, and concentrate on MRI procedures. The third class is the MRI practicum, and I'm able to double dip with my job. Getting paid to do clinicals is the way to go!!! I will have to go a hospital to complete some of the more obscure exams though.