If you missed the first part, Click Here for the Link.


This is part two on grocery stores - Coupons. When you combine the price book with coupons, you can get some very good savings.

COUPONS: How to get them is the biggest problem. Ask your friends, family, co-workers. Buy multiple papers. Dumpster dive at the local recycling bin. I worked as a box route carrier for our local newspaper and theft of Sunday papers was a huge issue. We were ( and most are ) independent carriers for the newspaper company. For every newspaper that was stolen, we had to sale three more just to break even. Besides, with a little hard work and research, you can get paid to take an item home. FYI: I probably spend about an hour a month cleaning out the old expired coupons.

UPDATE: The show "Extreme Couponers" has made it more difficult to find free and cheap stuff. It is still possible though, just a little harder.

WEBSITES: I use a few, but search goggle for those that fit your personal style.

A coupon preview site http://www.sundaycouponpreview.com/
--Print pages 1 and 2 for a quick reference guide.

A site for multiple stores with coupon matching to items http://www.afullcup.com/
--An excellent way to matchup coupons. 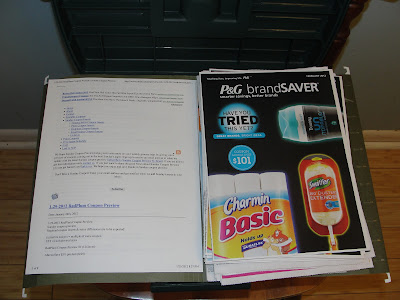 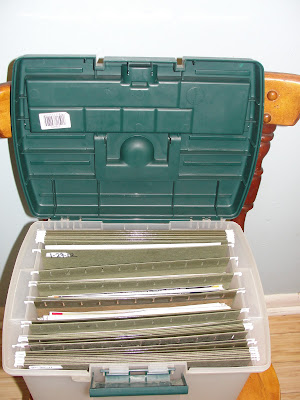 This method has worked extremely well for me.
( Note the printout and uncut inserts )


RESULTS:
Combine the price book strategy and coupons/websites and this is what I've gotten for free over six months. Well, this pile probably made me about $12.00 to $20.00. 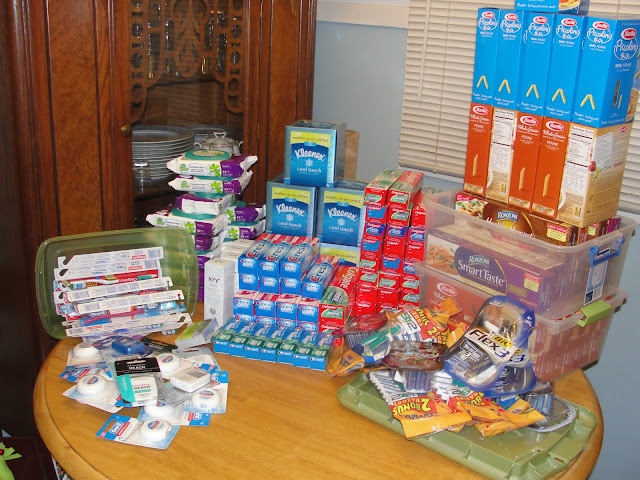 Once I have enough supplies to get through school, the surplus gets donated to family and friends. This is how we build our stockpile and this is just the free stuff!
Posted by K No comments:

We try to keep the house clean, but even the cleanest houses can get roaches. They often travel from the store to your house via groceries. I talked with my pest control guy at work and learned quite a lot from him. Here's a brief lesson.
We also talked for a few minutes about how to combat them at home. He said that the safest way to fight them (with kids and animals in the house) is to use Combat Roach Gel. (Pictured Below). 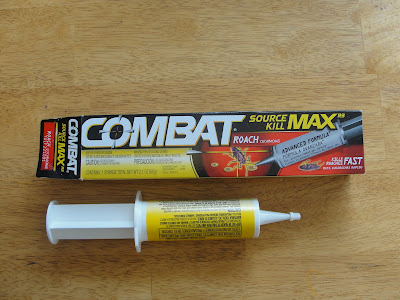 These are the steps:
I followed his directions and it worked great. I will be reapplying tonight under the refrigerator since I saw a little baby roach today. I will mark the calendar to reapply another dose. The tube should last me a very long time since a lot is not used each time. FYI - A bead of gel for me was about an inch in length and I used three around the area that the offensive pest was seen. Last time that I did this was around 6 months ago.

Future posts will deal with ants and rodents. Sanitation will be a big issue in an emergency that I haven't seen a lot of sites discuss.
Posted by K 1 comment:

In history class, we talked about traveling salesmen. The most notable in the United States is Aaron Montgomery Ward. He would travel from town to town and hand out catalogs. People would then scan through the catalog and place an order through the mail. Thus,the first mail-order company was born. But Richard Sears and Alvah Roebuk would perfect this new niche market and make a huge impact on how people shop. The catalogs were quite thick ( for the time ) and people would grab their Sears and Roebuk catalog and head to the outhouse. While taking care of their business, they would read the catalog and see what they might like to order. When business was concluded, a page was ripped from the catalog ( presumably from something they didn't want ). This got me to thinking that a phone book catalog could easily be substituted for toilet paper in a pinch. I'll have to set aside my recyclable phone book next time and store it for hard times. Better than leaves!
Posted by K No comments:

Email ThisBlogThis!Share to TwitterShare to FacebookShare to Pinterest
Labels: History

Why do I prep? Family. It is a fact that accidents, mistakes, and "Oh Shit" moments are going to happen. 100 percent probability. Why not try to minimize the event? I am actively preparing for unemployment since I am returning to school full time for a career in the medical field. Actually, I'll be working one or two shifts a week depending on the amount of time that school requires. I also believe that inflation is a 100 percent surety. Things are not getting cheaper and my income isn't rising. Given all of these factors, it makes perfect sense to plan, to use some foresight, and to be prepared.
I am also a backpacker. When preparing for trips, I try to think of everything that I might need. It is just a logical extension to include my house and family. I don't expect the government to collapse, or an asteroid to hit the Earth, but I do plan for snowstorms, wage losses, the power going out, and inflation.
I have learned to use extreme coupons techniques ( a later how to post) to reduce my grocery bill while increasing my stockpile. I shouldn't have to buy toothpaste, toothbrushes, floss, deodorant, soap, razors, and a few other items for at least three years. All of these items were free once coupled with coupons, sales, and a little work. A few of the items, the store paid me to take them out of the store. I have also been preparing for a small power outage ( think snowstorm ) by having a generator ready to be used ( yet another post ).
My ultimate goals are to be away from my city and have a country home that is custom designed. Homesteading with minimal grid reliance. This is many years away, but the groundwork is being laid down now.
The power grid going out or financial collapse (recession/depression) are my two biggest long term concerns. I lump pandemic, snowstorms, tornadoes, and earthquakes into the same scenario. They are just a few added steps and/or preparations apart. A nearby town was hit by a tornado, and they were out of power for over three weeks. What would you do?  Anyways, just a few random thoughts.
I do watch National Geographic Preppers series. I'm not very fond of how they show the idea of being prepared as a mental disorder.
-K
Posted by K No comments:

This post is about how to use the cyclical prices at the grocery store to your advantage.


===Items Needed===
I purchased a lined book at Walmart and also a package of sticky tabs to add to the book. My grocery store has 16 aisles so I added 18 tabs into the book. Usually I start on the right side of the store which is the 16th aisle (milk,dairy,etc...which is the right side of my store), so my first tab is labeled "16 dairy,juice". This allows me to go from front to back through the book as I do my grocery shopping. The last tab is for the produce/bread aisle.

I  also add the item package size or ounces/unit cost and the reg price and date, this helps when shopping at different stores for price comparisons. TIP: Different Color pens/pencil can be used as a legend for different stores. Sale dates are noted under the price with the date.This dating allows you to figure out the length of the sales cycle. Your job is to buy at the bottom, but it will take you at least one sales cycle to figure out the length of each cycle.
The time that it takes to start a book is quite a lot, but takes less time the more it is used, because a lot of the information is already in the price book. It took me about two hours the first two times I went through the grocery store, but on an average trip it only takes about five minutes longer. The idea is to catch your regularly purchased items at the bottom of the cycle. Mouthwash is usually around $2.49 but last time I caught them on sale for $1.00 each. I wrote the sale price and date into my book and bought 10 to get me through until the next cycle. That was about five months ago and I still have five left. When they go on sale again, I'll buy whatever amount it will take to get me to 10 mouthwash again. So, I'm saving around 60% off on this item alone. Now, do this with all of your items that can be stockpiled and add up some real savings. It will take a while to start to see some savings since you are front loading your costs.

Click here for the link to Part Two .
Posted by K 3 comments:

1. A scheme, program, or method worked out beforehand for the accomplishment of an objective: a plan of attack.
2. A proposed or tentative project or course of action: had no plans for the evening.
3. A systematic arrangement of elements or important parts; a configuration or outline: a seating plan; the plan of a story.
v. planned, plan·ning, plans

1. Perception of the significance and nature of events before they have occurred.
2. Care in providing for the future; prudence.
3. The act of looking forward.

I wanted to share my thoughts and information about prepping to help others prepare. These posts will be a journey of learning, research, and more importantly action. I have a strong background in the restaurant industry, so I lean heavily towards the food aspect of prepping. I'll be trying many different recipes along the way and honest comments about the product/recipe.  I have a very good background in backpacking, and good at logistics too. I'll be sharing tricks, tips, and hints from the kitchen to the field. I have been blessed with a great wife that is on the same page about prepping (except for antibiotics ) along with two young men ( ages 3 and 6 ).  I have been actively prepping since September of 2011 and consider myself somewhere between rookie and veteran . I want to learn and share.

Posted by K No comments: