Memorial Day food preparation was very light,but a lot of cleaning was done yesterday. I had Row help me make compound butter for the steaks, or what I called it: Trinity Butter. The Holy Trinity in cooking is salt, pepper and garlic, so I included roasted garlic, Himalayan Pink Sea Salt, and fresh ground black pepper to a mortar and mixed them together. Row called it tri-ology butter, and I had to let him know that was the study of threes! He meant to say trilogy butter, since it had three main spices. I'm good with that...

The Trinity Butter was placed in the refrigerator to let the flavors blend, and small pats will be placed on top of the freshly grilled steaks on Sunday.

We are getting ready for our friends to come over on Sunday for Memorial Day. We hang out in the front yard: no electronics for the kids, food, beer, pool (baby and kiddo) appetizers, steaks, Baggo, football toss game, hammock, other games are being planned, as well as our semi-annual 80's music trivia game. Why Sunday? Gives us all a chance to relax and recover before work. I'm sure our house will be invaded by the neighborhood kids.

I am slowly ramping up the preparations (cleaning and food) this week, and will make "What I did today" type posts. 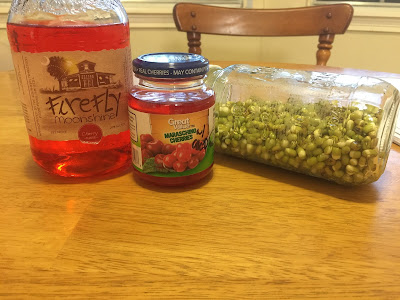 Sweetheart had two adult cherry Cokes in Branson, MO and we are replicating our own version.  The Maraschino cherry syrup is drained and replaced with Cherry Moonshine so that the cherries become little alcohol bombs of goodness. Cherry Coke anyone?

Two ounces of mung beans were started on Monday with a 24 soak, then rinsed and drained every morning and afternoon. These will be used for an Asian appetizer that I have planned. More to follow on this little delicacy...

The menu is firming up to look like this:

Keep Right On Prepping - K
Posted by K No comments:

I told my wife that I was hoping to post a weekend in review, or a week in review every Monday depending on the events of the week and time permitting. I always have time, just lacking the inclination. The older I get, the more I realize that not having the time is a poor excuse, because we all make time for the things that are important.

This is my brain: 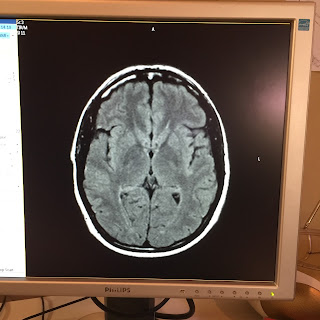 The good thing about working in an MRI clinic is the opportunity to jump into the scanner to work on improving the imaging protocols. When my boys are teenagers, this is proof that I have a brain.

We continued to work on the front yard, and improve the curb appeal. We have exhausted the landscaping budget, and I think we've done pretty good on a $1000.00. This weekend we spread two truckloads of super soil and 8 bags of bark mulch. The bark mulch went under the two trees that we ringing with metal edgings, over weed block. I'll have to squeeze out about 4 more bags of mulch ($10) after payday to finish this area to my satisfaction. 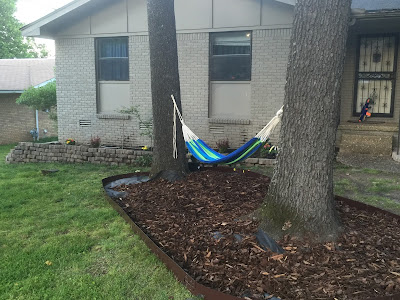 This area was begging for a hammock. 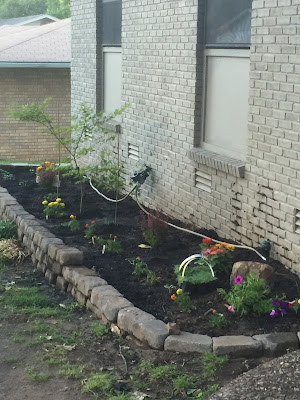 A lot of plants were planted, but I was inadvertently a terrible father and accidentally covered Red Ant's watermelon plant he had grown from seed at school. When he came out and saw what had happened, it was full tears running down his face. Talk about feeling bad...

We (Sweetheart mostly) finally got Row calmed down and I promised him that we would go buy more plants just for him. He selected six watermelon seedlings, and a pretty tray of flowers (bottom right) that he was sure that Mommy would like the colors.

I'll post more pictures of the plants when I get a written list of the plant spellings. A lot of marigolds, 2 strawberry plants, 2 tomato plants, and 2 Zinnia plants went into the new soil. I also got my new toy hooked up, the Orbit automatic watering system. I have plans to expand the system to get most of the front yard, so that I can plant some Bermuda seed, then weed and feed the yard for a really lush yard. I figure it'll take a two or three year time frame for my dream lawn. We have the time, not the money. 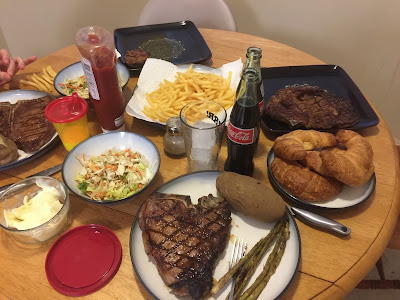 My school's official graduation ceremony was this weekend, but I opted to work on the house instead of spending 3 hours listening to self-inflated old men talk to themselves. Besides, my wife, boys and parents told me that they were proud of me...that's all that really matters.

That being said, I had thought about going out to eat, but really just wanted an awesome steak dinner. You know me, I'd rather go to the butcher shop and get some REALLY nice steaks for the price of an average restaurant meal. Here's what we had: Angus T-bone for parents, Ribeye for Row, Filet for Red Ant, grilled chicken for The Doctor, Asian salad, baked potatoes or psuedo-McDonald's french fries, roasted asparagus, and croissants.

Email ThisBlogThis!Share to TwitterShare to FacebookShare to Pinterest
Labels: House

A few Sundays ago we were at the lunch table having burgers, and the origin of brunch came into the discussion. It's combination of breakfast and lunch, so Red Ant wanted to know what the combined word for lunch and dinner was...logical question. We quickly quipped that it was snack, but we both saw an opportunity to bring preparedness into the equation. Remember the tea brick topic [LINK] ? 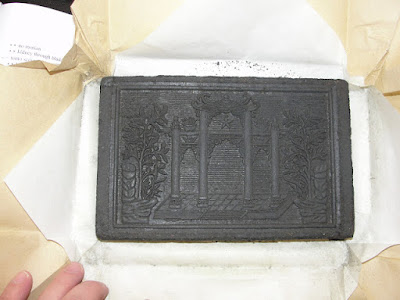 We talked about the history of tea bricks being shipped across the ocean on wooden ships instead of loose tea for higher profits, the trade routes, and how tea is dried and pressed. (economics, history). The Boston Tea Party (history). The traditional British tea time at 4:00 with hot tea and cakes,scones, and/or cookies (culture). How to make hot tea with the tea brick (cooking, preparedness). The shelf life of the tea brick (Long term Storage)  The proper way to drink tea, no slurping (manners).

We also had a teachable moment of family history. Grandmother's china was used, and I got to talk about her homemade meatballs, what a great cook she was, and how she was their Great Grandmother from my Mom's side of the family. I'm trying to pass along my memories of their relatives so that they aren't forgotten.

Email ThisBlogThis!Share to TwitterShare to FacebookShare to Pinterest
Labels: Kids

I was going through some of the old,and I mean old, employee meeting to kill time and because I'm nerdy like that. I came across this one in the early years. Spell check does NOT catch everything!

In response to the $10,000 windfall, here is a rough estimate of how we have spent the money so far.

$2000 for a husband/wife retreat to Branson, MO with Christmas shopping and relaxing.
$1800 fixing a water line leak (NOT by choice) but glad to have cash available
$1000 ammunition for stockpile
$900 new gun (I'll finance half out of my own pocket)
$1000 set aside for deck
$1000 landscaping

Which leaves a whopping $2300 left for glasses for the boys, vacation to Gatlingburg and Destin, and savings.

Email ThisBlogThis!Share to TwitterShare to FacebookShare to Pinterest
Labels: Money

The Weekend In Review

Earlier this week, we had a small water leak fixed from the meter to the house, which means that we spent over a house payment. It's fixed, and we had the money and Sweetheart got a project scratched off her list. She wanted to pull all shrubs from the side of the house, move trashcans to the side, and tear out the broken brick flower bed. We spent the weekend raking, pulling, mining, salvaging, and replanting the side of the house. This is the finished project with Bermuda seed thrown out for a lush lawn (hopefully!). 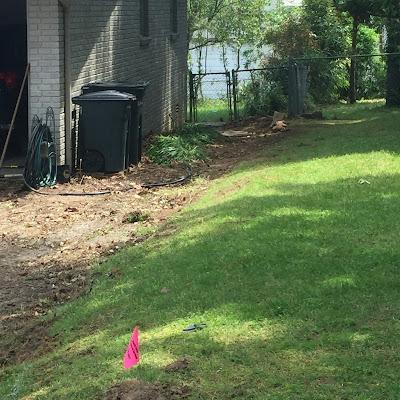 Water also drains across the driveway, so I trenched along the driveway and created about an inch gap between the concrete and the soil, with the idea that the water will seep into the "moat" and leave an area where I can not step into a muddy puddle to get into the car. I was ecstatic that I discovered an overgrown french drain that is still in working condition. The previous owner had allowed the grass and dirt to clog the drain, ergo the discovery! 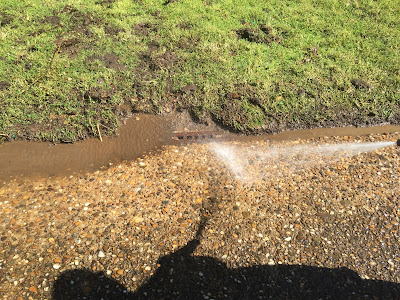 Sweetheart also got treated to sleeping in, and breakfast in bed. Red Ant lead the procession with the orange juice and the wake up greeting, followed by Row with the food, and The Doctor with his snack pack of Pringles (to be eaten in bed with crumbs everywhere!), and by myself with the all important coffee. After the wake up, we left her to enjoy the breakfast in solitude. 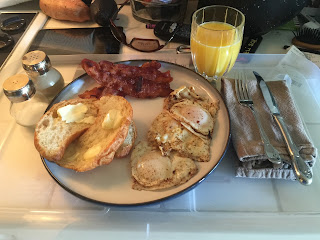 Stock those Beans,Bullets, and Band-Aids and Keep Right On Prepping - K
Posted by K 2 comments:

Email ThisBlogThis!Share to TwitterShare to FacebookShare to Pinterest
Labels: Sweetheart

I was wrong about my presidential prediction of Cruz versus Hillary. Tonight, Ted Cruz has officially ended his campaign for president after the Indiana sweep. Dear readers, it is time to batten down the hatches, accelerate our preparations, deepen that larder, and slip into the crowd without drawing attention to ourselves. 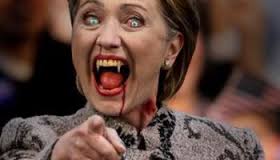 Any weaponry that you want, buy it now before the election, especially magazines that hold more that 10 rounds. Beat the rush...ammo will dry up again.

Minimize tax exposure.
Slowly accumulate cash in household, avoid large cash withdrawals.
Purchase gun(s) that you have wanted.
Stockpile more ammo.
Purchase magazines (+10 rounds) of any guns that you own or want to own.
Reduce expenses.
Plant a garden or fruit trees.
Deepen the pantry.
Make hiding holes for supplies and weapons. (large PVP pipes and caps)
God help us.