A World of Change

As my regular blog readers know, most of the guys from our graduating radiography class get together once a month to stay in touch and have a few laughs. We take turns picking restaurants and spend a few hours drinking a beer or two, eating good food, and having a few laughs. I like to pay in cash, and on three of the latest occasions the waiter/waitress has decided to keep the change. I usually tip well, since I worked on the industry for 23 years. I can do simple math in my head, and I'm usually easy to get along with. A cash tip is great for the waiter since they only have to claim 8% of their sales for tax purposes, but have to claim the full amount of debit/credit cards. Thus, a cash paying customer is a boon for the waiter since it gives them more buying power...less taxes. This is where my rant begins.

The first time, I was informed that they didn't have change at the restaurant. Really? How dumb are your customers to believe that load of hooey? His tip severely suffered, and I left without a word, and I won't darken that doorway again by my choice.

The second time, I was more aggressive about the situation. I called the waiter over, and asked about my change. He stated that it was a math error, so I called him out on it. He had decided to pickpocket keep the change from those of us that paid in cash. I asked why he had short changed my friend as well. He promptly left, and got my change from the bar. I'm not quite sure what I said to the waiter, but something along the lines that  I didn't appreciate being pick pocketed, and he should always round to the customers favor. He didn't want to hear my lecture...

The third time, Revolver decided to leave before I made a scene. Everyone at the table has hoping and praying that I got some coinage with my change! He might be proud to know that I handled it better. I called the waitress over and asked her whether it was because I was old school or was it customary to keep the change. She gave the lame excuse that management didn't allow them to turn in change, and that she "just looks at the number of dollars, and counts that out." I again explained to her that you should go the extra mile and earn her tip, rather than just keep my change. She proceeded to tell me that I was right while she pulled a dollar from her pocket. Her tip was about 8%..and I left her a note that she missed out on a 20% tip because of the change issue.

I'm sure that Revolver610 expected this post a long while ago. It's taken me a while to actually calm down and write this post without a lot of foul language. 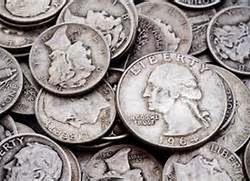 I've seriously thought about having some business cards printed that read: Since you decided to keep the coins, you also decided on your tip. Always round in the customers favor, and don't pick pocket them.

President Obama has right about hope and change. I hope I get my change. Give me my damn change next time.