This will be a quick one today. 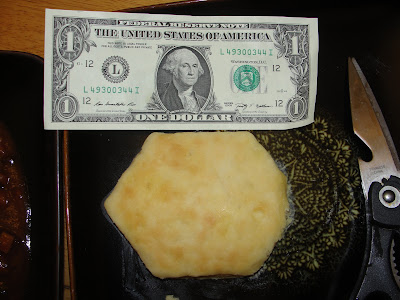 I was anticipating a mix between a Bisquick biscuit and the canned variety.

Row, the resident seven year old and new Tiger Cub Scout, thought that it tasted good. For full disclosure, we did add olive oil margarine to the biscuit. He does still prefer the Grand butter tasting biscuits the best though, and he gave about half to his brother.

Ant, the four year old, took one look at the biscuit and declared that "I love biscuits!" And again for full disclosure, he does love butter. I asked him if he wanted Row's biscuits and he nodded yes and wanted me to "put more butter on it too".

Sweetheart thought it was slightly sweet with a dense texture. She would eat it again.

I thought it was really moist for a packaged biscuit, and it had a nice aroma after opening it. The biscuit had a good texture, very similar to a compact heavy bread that hasn't quite risen enough. We did warm the packaged biscuit in a pan of boiling water, and it had a nice out-of-the-oven feel to it. It's not as good as a freshly baked biscuit, but it was a very acceptable substitute.

It would go good with several MRE meals that we have sampled in the past. The overall quality of the biscuit is very acceptable considering it is an MRE and packaged for a long term shelf life.