Today's review is a pretty safe one... 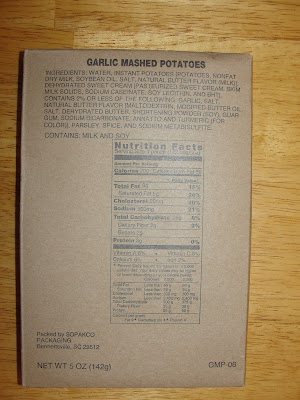 Mashed potatoes aren't that hard to prepare, and not that many variations, so white, creamy are my expectations. Hopefully real potatoes were used for this MRE rather than instant. 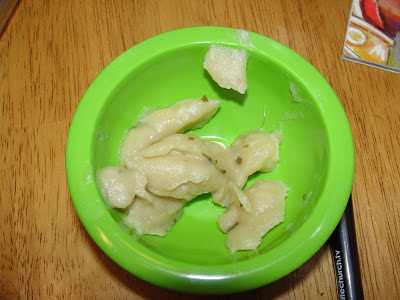 Row was the first one to sample this MRE, and he took his usual small cautious bite. "Hmmmm", was the first word out of his mouth followed by, "I like these". Well, thank goodness one of my boys has my meat and potatoes taste buds. If it ever hits the fan, both boys had better like rice and potatoes, because they are going to be the main staples at our house. He also finished his sample which was his seal of approval for this side dish.

Red Ant, the younger one, was saying that he didn't like it even before the spoon hit his tongue. We didn't press the issue, and I took over his sample dish.

MIL was over and really liked the creamy taste, and really "liked them."

Sweetheart, who is on a detox diet, took a small bite and liked the garlic flavor and creamy texture.

These will make the A-list for reorders just for the fact that Row liked it. It's really hard to screw up mashed potatoes, and these are actually pretty good. The creamy texture, and garlic flavor are the two biggest traits going for this MRE, so if you like those, then order away!