After the Virginia shooting, Monica Lewinski's ex-boyfriend's wife stated that, ""There's so much evidence that if guns were not so readily available..."

The anti-gunners aren't going to give up on taking away your rights to bear arms [2nd Amendment]. I strongly urge my friends and family to purchase standard capacity magazines (30 and 40 round) for ANY gun that they HAVE or MAY want in the future. For your AR-15, I suggest about 10-30 magazines. For your other rifles and pistols, I suggest at least ten. 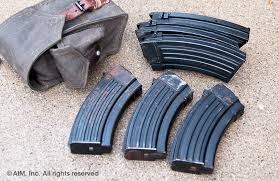 Keep fighting and pushing back against more gun control. Vote, but also prepare for the day when you won't be able to freely and cheaply purchase a magazine of your choice. I also strongly advocate purchasing firearms through private sales.

Email ThisBlogThis!Share to TwitterShare to FacebookShare to Pinterest
Labels: Guns