In 2013, Act 746 added a few words to the statute that made it a violation to carry a handgun, knife, or club for the use "with purpose to attempt to unlawfully employ the handgun, knife, or club as a weapon against a person." The Attorney General at the time, Dustin McDaniel, said in a nonbinding statement that it did not  permit open carry. The current governor, Asa Hutchinson, and the current Attorney General, Leslie Rutledge, have commented that they believe open carry is legal in Arkansas under the current statute. 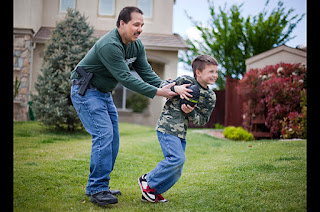 On May 4th, 2015 Richard Chambless was arrested in Bald Knob at a McDonalds for openingly carrying a weapon. On Tuesday, August 25th,  he was convicted for carrying a weapon and disorderly conduct. I suspect the disorderly conduct conviction came as a result of him standing up for his rights. We can't have people standing up for their rights, now can we? He was sentenced to 15 days in jail and a year of probation. His attorney is appealing the conviction. The governor, Asa Hutchinson says that "I expect an appeal to the Arkansas Supreme Court because it's a constitutional question, it's an important question for the Arkansas Supreme Court to clarify."

I've expected a case to make it to the Supreme Court of Arkansas much sooner, and will be elated to hear the court uphold a constitutional carry right in Arkansas. I'm a supporter of concealed carry, since I'd prefer the bad guys not to know that I have a weapon, ergo a target. I'm also a supporter of open carry...however you choose to defend yourself and family.