This is an MRE that my Sweetheart has looked forward to reviewing ever since she saw the word toffee. 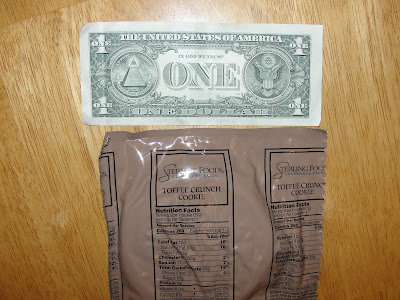 Expectations:
I have learned to limit my expectations and to keep them open at the same time. A lot of disappointments come from having our expectations too high. I could delve into Eastern religion, but that would be a Zen post. Enough of my ramblings, I expected a cookie similar to the Chocolate Chip Cookie, but with a toffee taste. 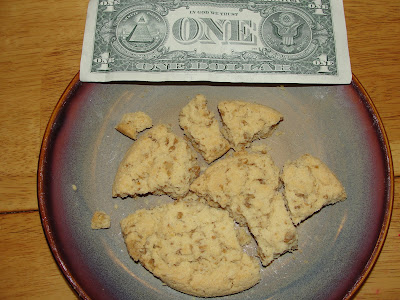 Realities:
The cookie looked whole when the picture was taken, but once opened six big pieces came out. Besides the sight of the cookie, the smell was the most noticeable first impression. It had a very pleasant toffee aroma.
Red Ant didn't play around with this cookie. He took a small bite, then promptly gave his allotment back. This was a big no vote.
Row was also of the same mind. He took his usual itsy-bitsy bite and announced that he didn't like it. Both of these reactions weren't a big shock to either of us.
Sweetheart had a better insight, and was excited about getting to sample this MRE. She has been patiently waiting to unseal this dessert item. On her second bite, she gave a slight nod and commented on the "toffee flavor, but no toffee chunks." I sensed some disappointment here. After another bite, "It reminds me of toffee syrup that goes in coffee." She had finally found the proper description that she was looking for since the first bite. She admitted that she was "generally pleased", but had high expectations, like a heath bar cookie.
I'm not really that big on toffee flavored treats, but thought it had a good smell, and a rich toffee taste. It wouldn't be my first "go to" cookie, but it would find room in my backpack.
Final Thoughts:
The kids gave it no stars. My wife gave it a half star, but since the computer won't print half asterisks, and some mild prodding it got upgraded to a full star. I also gave it a star. I'm not sure if it would get ordered again.
I just asked my wife again, after a few hours, and she said that she would definitely order them again. She actually perked up when I asked her, so I'll be doing a reorder. Mainly as her comfort food.
Stars: * * (2)
Posted by K