We picked this one because we wanted to see if the title would fit on the page. It does. 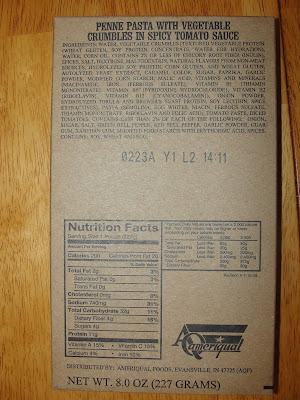 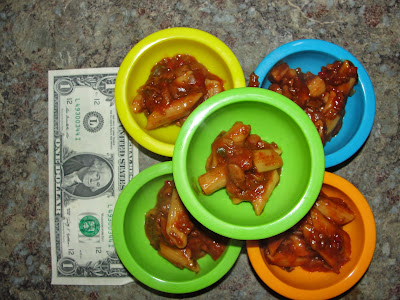 We've had a few MREs that were pasta based, and expected a pouched variety of Chef-Boy-r-Dee.

Row, our seven year old, sampled a spoonful, chewed it for a minute, then said that he didn't like it. I asked him why, and he said " It tastes kinda funny."

If Row doesn't like it, then it's almost a guarantee that Ant won't like it either. It held true with this MRE, except that Ant was quicker to say that he didn't like it.

My Mother-in-law likes the spicy flavors, and thought that it was better than most frozen entrees. She also noted that at her age, spicy is a better.

My Sweetheart's first impression was the aroma, and it didn't start off very well. She said that she wasn't impressed with the scent. She continued to hammer the MRE because the noodles were too soft, and it had a chemical taste. I can vouch that she is a "Supertaster", because she will notice details in food flavors that aren't obvious to me. She also noted that the veggie crumbles weren't fooling her either. She did go on to add that she would put it on the B-list for MREs. This means that if a case of MREs turned up on our deserted island, then it would probably get eaten towards the end.

I thought the same thing about the noodles being too soft, and the spicy flavor was slightly noticeable towards the end. I would call it more flavorful than spicy, and it would be placed on my B-list as well. 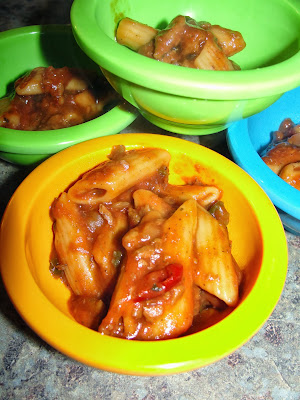 Worth a shot, if you like flavorful pasta dishes, and the noodles that are on the softer side. Both adults gave it a star, but it won't be one of the more sought after MREs.