Sweetheart got to pick out today's review, and here it is on a Monday evening for April Fool's Day. 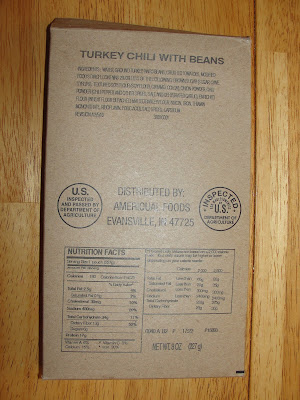 Canned chilli with beans would be my guess. 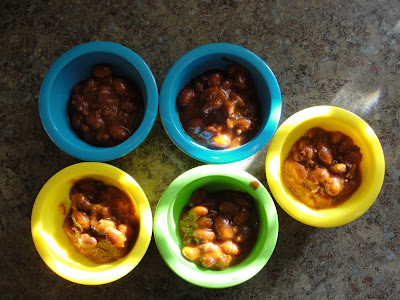 Row was the first to sample the chili, and I quote, "Hot,Hot,Hot....I don't like it". This is the second week in a row that we had a kid "spicy" entree.

Red Ant With Pincers, was saying that he didn't like it even before he had a small bite. Sweetheart fed him a bite and he said that "Don't like it".

Mother-in-law was dining with us and she made the comment that it resembled ranch beans. "It doesn't taste like chili, rather like ranch beans." I wasn't sure whether she liked it or not, but she did finish her small sample. The conversation between Sweetheart and MIL did at one point revolve around the fact that the  size and nutritional contents of the package would make for a nice diet food.

Sweetheart, thought that it was heavy on the beans and humorously noted that the packaging should be called Beans With Turkey Chili. She did like the spicy flavor of the chili and said that it was decent. She also didn't hesitate to give it a star and made the final comment that it was "pretty good".

I thought that it had a good texture and the spicy flavor started to kick in around the middle of the chewing process. I'll admit that really spicy food makes me sweat, but this wasn't too spicy. I'd also like to say that I'm not a big fan of chili. Even with both of these considerations, I could see a package getting into my backpack for an extended trip to vary my diet. The nutritional values are really good for an MRE, lots of fiber and the sodium is on the low side.

The Turkey Chili With Beans isn't a bland dish nor a Tabasco spicy hot either, but a nice compromise between the two. The chili does have a lot of beans, so if you prefer your chili without, I would look elsewhere.