One of the newer items from Emergency Essentials was the side dish of crackers. I ordered them, and here is the review. 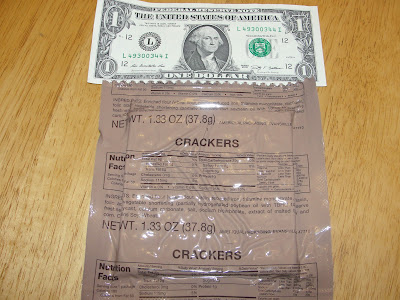 Expectations:
Okay, crackers really aren't that special, but some saltines sure would be nice after spending a few weeks on the trail. Especially if you combined it with one of the MRE soups or stews. 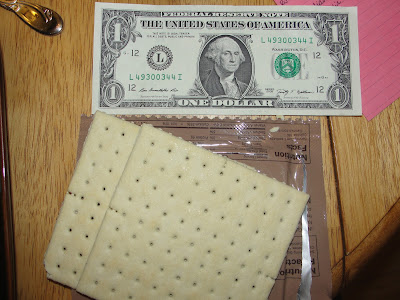 Row, who had a recent birthday, and is now the seven year old in our house, thought that the crackers were too thick. He took small bites and was generally disinterested in the crackers.

Red Ant, the four year old, paired his cracker sample with his salad, and relished the crackers in ranch dressing. He didn't have to be prodded or bribed into eating them, and was happy to eat another cracker, or two.

Sweetheart wasn't impressed and thought that it had a generic taste with no real flavor. She did comment that these would be a great crunch factor when all of the saltines have gone stale.

I thought it would have been nice to have some salt on the top of the crackers. They were a bit thicker than regular saltines which gave it a hefty crunch. I had thought that I'd miss the salt, but after a few bites thought that it was a nice change.

They are a bit on the pricy side with 8 sized saltines going for $.95. This wouldn't be a good value for a retreat, but I might consider adding a few to a week long backpacking trip. I does score 3 stars with Red Ant, Sweetheart, and myself giving it the thumbs up.