The first MRE to be reviewed this year is the Mexican Style Rice. 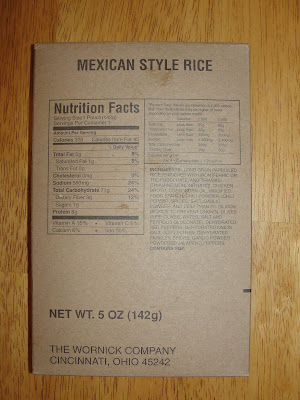 After another MRE Fried Rice dish, I wasn't very hopeful about this side dish. We were having Mexican food that night, so it made sense to give this one a review.

Row, the soon to be seven year old, was pretty funny and put two small grains of rice on a spoon and carefully put it into his mouth. After which, he said, "I don't like it." This seems to be the typical response to any MRE that we have tried recently. I asked for a further explanation and he said that it was spicy.

Red Ant with Pincers, the soon to be four year old, immediately said that he didn't like it, but didn't spit it out. 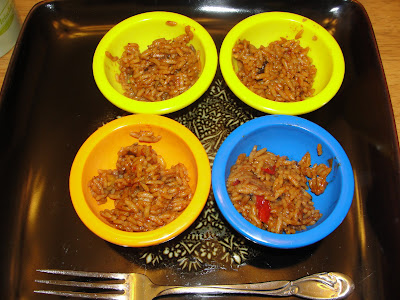 Sweetheart, the food critic extraordinaire, sampled her dish and noticed that it was "heavy on one of the flavors". It was immediately narrowed down to chili powder, which looking at the photo is now obvious. She thought it was a nice touch to be able to see small bits of real bell pepper. After a few more bites, she commented again that the chili powder was still way too heavy for the side dish, but salt did improve the overall taste. She said that "I would eat it again, as long as I had salt." It wasn't on the top of her list, but wouldn't go out of her way to buy it either.

My first observation was that it had little bits of corn in it. The second one was that I had the same thoughts on the chili powder, it was too much. They probably could have halved the amount of chili powder and still produced a spicy rice dish. 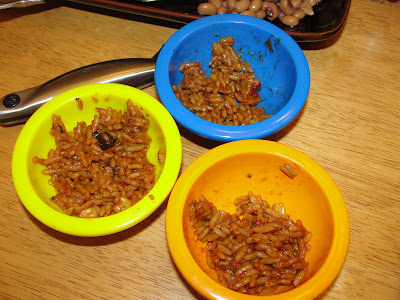 Overall, only one person would buy this product again, but it wasn't on the A list either. If you like spicy and rice, then by all means order one and see what you think about it yourself. Personally, I would rather pack in a precooked pouch of rice that has a greater quantity and quality for about the same price. On the other hand, MRE's main advantage is they are precooked, and have any extremely long shelf life. You'll need to determine your balance between the two: shelf life and portability versus cost and taste.