Today's MRE is beef ravioli in meat sauce. It should go good with the sandwiches that are planned for dinner. 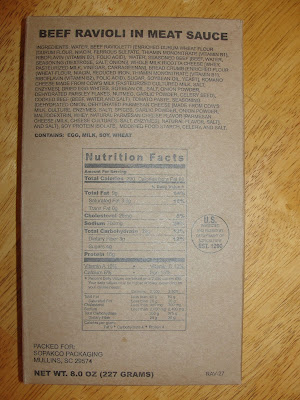 We are expecting the MRE version of the canned stuff from the Chef.

Row, the seven year old, explained that it was "medium good" which is along the lines of an extra medium sized T-shirt.

Ant with Spikes, the four year old, took his small bite and declared that it "doesn't taste right like spaghetti." It didn't go to waste very long since Row was sitting right next to him. Ant's sample ended up being eaten by his big brother.

Sweetheart commented that "it reminds me a lot like Chef-boy-r-Dee. She noted that the sauce was thicker than the canned variety, which she liked. She preferred the MRE tomato sauce over the canned stuff and it earned her star for the dinner. She also noted that the MRE was good with the boxed wine of White Zinfandel.

The nickle sized ravioli with the pellet meatballs had a very mild flavor. I have to remind myself that a lot of companies have to tailor their food palate to the lowest common denominator. This MRE entree could use the small bottle of Tabasco that accompanied the older MREs. Do they still put the small bottles in the MREs of today? Anyways, the texture was the same as the pasta with differences in the dish.

I would have had more photos, but in my haste to transfer them to the computer, I deleted them and I do apologize for the lack of them.

This is one of MREs that if the canned variety is an option, then buy the canned variety because there is virtually no difference. This MRE would be better suited for canoeing because it wouldn't sink, and other situations when the canned raviolis wouldn't quite fit. Another scenario would be where the chemical heaters are being used due to a no campfire area or stealth camping.

These would be put on the B-list for ordering because of the above mentioned reasons.