Today's MRE is a breakfast dish and is available through Emergency Essentials for $2.75 each. 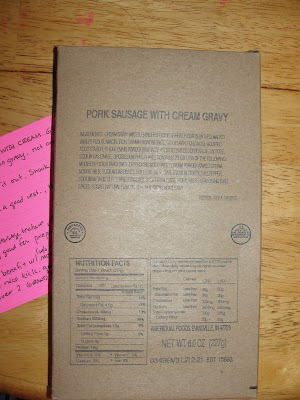 I've tried a canned cream gravy once, and I wasn't that impressed with the product. Plus, I like to make a cream gravy at home, so I have pretty high standards.

Row, the bacon aficionado, took a big bite of biscuit with the cream gravy on it and thoughtfully chewed it. He commented that next time he would prefer a bite without the gravy.

Red Ant with Spikes was the first to try this MRE with his usual small bite. I asked him how he liked it, and he kept shaking his head. He wanted to spit it out, but washed it down with chocolate milk instead.

Mother-in-law immediately liked it. "Restaurant Quality" was a nice compliment that she gave the MRE and noted that it even had some flavor!

Sweetheart liked the sausage texture, and it had a real good sausage flavor, but the gravy has a bit on the thin side. She also noted that it was good, but not great. Overall, she was pleased with the prepackaged gravy and gave it her thumbs up for a star rating.

I thought it had a good white color and a pleasant scent. On my first taste, I just sampled the gravy, and I thought that it was a little blanch for a white gravy. It could have benefited from a little more pepper. I did like the fact that it had a lot of sausage bits. My next bite had lots of sausage in it, and I had to reassess my first opinion of the gravy. The sausage added a nice kick to the gravy, and complimented the gravy very well. 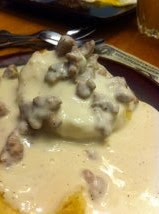 There was a lot of sausage, and plenty of gravy. The gravy nicely covered two Grand Biscuits that were split in half. The last bite mopped up the last little bit of gravy on the plate. This MRE tasted much better than the canned variety, but cost twice as much. This MRE would rock on a cold morning a long way from the trail head. 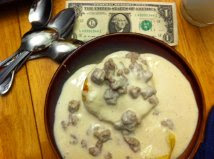