Here is the side trip that we made today.... 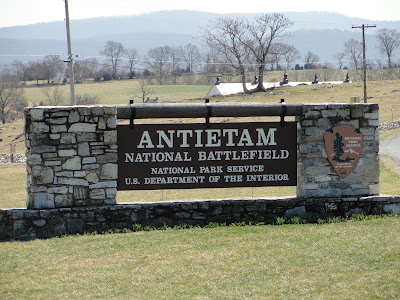 The battlefield is huge!!! 23,000 soldiers were killed, wounded or missing after twelve hours of savage combat on September 17, 1862.

Another battlefield wound was claimed today. Red Ant was walking around the monument (he has his Mom's grace) and tripped while having his hands in his pockets.  He's got a nice fat lip for all of the photo ops in Washington DC tomorrow.

We are driving to Shady Grove and taking the Metro into DC early in the morning. Smithsonian, Cherry blossoms, National WWII memorial, Vietnam Memorial, and Lincoln Memorial will give us a full day of walking.

I told Sweetheart that if we go by the White House, she'll be taking a photo of me facing the White House and flipping off Obama (for the Blog of course). I'll be practicing my First Amendment rights.

Email ThisBlogThis!Share to TwitterShare to FacebookShare to Pinterest
Labels: Vacation