This entree was purchased through Emergency Essentials. 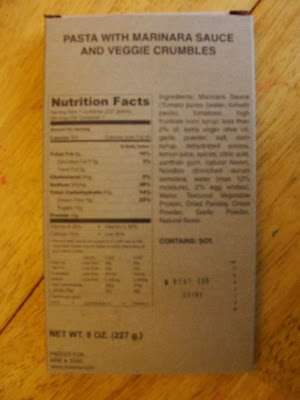 I think I always expect the pasta dishes to taste like Chef-boy-r-dee. 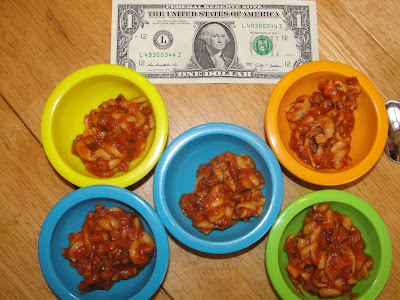 Row, the Star Wars obsessed seven year old, took his small cautious bite and said that he don't like it. I asked why, and he said, " It's too hot, and too much sauce." I don't know if he has learned this reply whenever we are sampling these MREs, but I don't press the issue since this is the main reason we are doing the reviews. We want to find out what the boys will actually eat, and what we can tolerate.

Red Ant With Pincers, the four year old that came up with his call sign, took a small nibble and politely said, "No thank you." And with that, we were done sampling today's entree.

Mother-in-law was having dinner again, and I think she secretly likes doing the reviews. She has been more forthcoming with the comments, and maybe realizes that food is being set back for her if things go south. Anyways, she thought that the texture was okay, and commented that the sauce is "much better than the canned stuff". She also thought that it tasted good. She was even more impressed with the MRE once she found out that it was a vegetarian dish, and that the meat crumbled were actually soy. She would have sworn in a court of law that the chunks were meat, since they had the same texture and taste of real hamburger.

Sweetheart was less impressed by the MRE. She noticed a chemical flavor, which is a preservative. I'm going to start collecting the boxes, and try to figure out which one she is tasting.  She wasn't impressed, and only said it was alright, but wouldn't award a star today.

The blogger was impressed with the veggie crumbles and thought that they were very good. I didn't notice the chemical taste, and the marinara sauce had a good flavor, which I would put a level above canned. I did think that the pasta was too soft, but I prefer it cooked al dente. 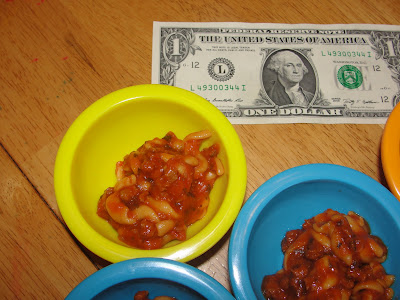 Final Thoughts:
The main advantages of MREs are the shelf life, no re-hydrating, and no cooking. If you needed to hunker down, and avoid detection, then the MRE really has a place in your bag. The speed of refueling the body is also a huge advantage for these meals. The flavor of this MRE only rated one star, but the beauty of MREs is that everyone can have a different hot meal with only a pan of boiling water for tea.