I got a new shipment from The Epicenter for some new MREs that were not available through Emergency Essentials. This is one of them, and they are known as First Strike Rations. I guess that a new name for MREs is part of the evolution process. 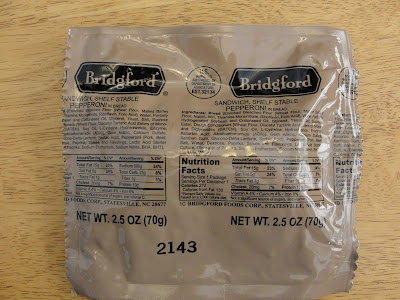 I was kinda expecting an MRE version of a Hot Pocket. 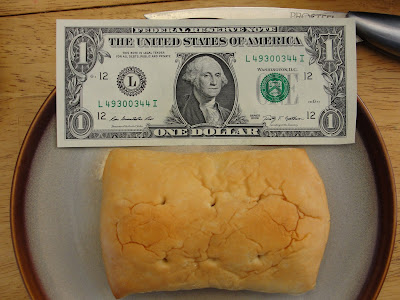 Row, the resident seven year old, had a very favorable first impression. "Cool, It smells like a hotdog!", were the first few words out of his mouth even before I had the chance to ask his opinion. He took a good bite and savored the flavor for a few seconds, then jumped from his seat and ran around the kitchen saying that it was "too spicy!". He dashed into the bathroom to get a cool drink of tap water.

Red Ant with Pincers, the charismatic four year old, took a small taste of the bread and said that he didn't like it. We coaxed him into taking a bite of the pepperoni, before knowing Row's reaction, and he said that he liked it. It was actually a little comical to see Row running around the kitchen, and Red Ant spitting out the meat into the trash can because the spicy flavor had kicked into gear. I don't think either one of them will be giving this week's MRE a star.

Sweetheart commented that the bread was soft, and that the pepperoni flavor permeated the bread flavor. She thought that the pepperoni was alright, but a bit tough. It ended up with a rating of "it wouldn't be my first pick", which means to me that if she has chosen all of her more preferable MREs, this would be edible. While this isn't a ringing endorsement, she did grant it a star for the review.

My first response was a chuckle. It caught me off guard to see a pepperoni stick in the bread rather than sliced pepperoni. The pepperoni was good and greasy, which in my youth meant great, but now requires at least two Tums. The bread had a great texture. The bread has greatly improved over the last few MREs. I don't know if this is the future, but it is a good evolution for the armed forces. I thought that it would be great for a "walking snack", which was a phrase coined by my backpacking mentor, Larry Williams. I could easily be snacked on while walking down the trail. I gave it a star for the bread texture and the walking snack factor alone. 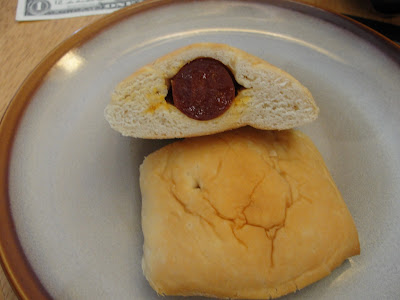 Final Thoughts:
While it might not make it into a long term food storage area. I could very well see it as a cache item just for the walking snack factor, or eating on the run.