We took off the outer layer of the wallpaper around the tops of the walls, and it has been a lot more work than originally planned. I heard the old saying that you double the time and amount spent on your original estimate and you'll get a good idea the true cost of your project. Well, it's holding true.

The outer vinyl from the ceiling border was a breeze to take down. The boys got a huge kick out of seeing who could pull the longest piece of wallpaper. Row won.

The under layer is a different matter. I tried to wet the paste and backing with water, let it sit for a few minutes, and tried to peel it off. Nope. I then tried a putty knife, but it only took out a few lines. A quick search on the internet found that vinegar and hot water would take the paste off real easy. I tried a new batch in the spray bottle and let it soak into the backing of the wallpaper. The putty knife again went after the backing and the results were the same.

I tried a small spot on the opposite wall to see what I was up against... 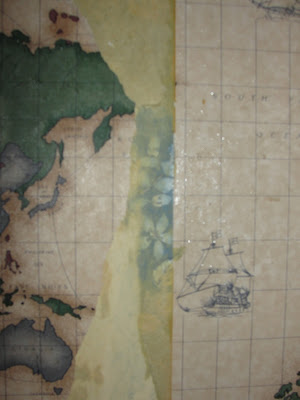 Underneath the old world map wallpaper, was another lovely wallpaper flower print. The owner before the one that I bought the house from was a widow, and I'm sure that she had a hand in picking out this pattern, or her flamboyant handyman. So, I'm not sure how this is going to translate into time committed for the project, but it's not going to make it any shorter.

I also remembered that Woolite mixed with water would also take the wallpaper backing off the wall. It doesn't.

While I was working on the border, Sweetheart was on the opposite wall peeling wallpaper. The big wall. She was making some good progress in removing both sets from the wall. The paste will need some heavy elbow grease to remove it. I tried a small patch, and it worked. I'll have to clean the wall with hot water and some Dawn to remove all of the paste, and to prep the wall.

This morning the boys and I made a run to the Lowe's and bought a small bottle of Piranha Wallpaper and paste remover (professional strength). After reading and following the directions, it was also a fail. The only thing that has worked so far is wetting the backing, letting it soak, using a putty knife, wiping it clean with a rag, using a steel wool scratch pad, wiping it down again, reusing steel wool, then doing the final wipe down. It took about 2.5 hours to do the shorter wall, but one wall is done. All I can say is that it works, even though I'm not happy with the rate of progress.

This day's progress was slow. We went to church tonight, which was a much needed break for my sanity, and arms. The process goes like this: wet, wait, scrape with putty knife, wipe with rag, scrape again, wipe with rag again, use steel wool for the stubborn paste, wipe it down, cock head to see if all of the paste is gone, climb down ladder, climb back up ladder for forgotten tools, climb down, move ladder. Repeat as neccessary.

I've managed to get two walls done, and about 20% of the big wall. Not too bad, considering I had to watch the kids most of the day as well. I'm thinking that this won't get done by the time the beach trip rolls around. I've got to complete some paperwork for the school, which will probably take a day. I'll also be helping my father-in-law move a washer and dryer into his house. He needs the help, and has offered to pay me for my time. I'll take a full tank of gas for the truck, and a few bucks. After all, he needs the help.

Anyways, I need to get back to the wallpaper, but it just might wait until morning.

Email ThisBlogThis!Share to TwitterShare to FacebookShare to Pinterest
Labels: Project