This Weekend In Review

The Fourth of July was another great event at our house. We had another couple over with kids and hung out in the carport just like last year's celebration. Teriyaki wings and Sriracha wings were appetizers and the orange soda, cokes, and beer were iced down the night before. 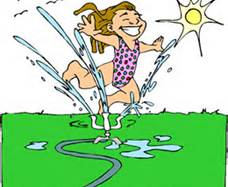 I took a lot of my music and put about 300-400 songs from the 80's onto the computer and we played name that tune. You got half a point for the artist and half a point for the name of the song, if either one is incorrect, then points double for the next person that can correctly identify it. I also added a twist with the option of double or nothing with 80's TV trivia as the theme. The early questions involved a lot of Three's company, and it quickly became a running joke when the bonus phase started. Last year's champion kept her title. She was naming songs with only a few notes, and her husband was saying " How do you compete against that?" (She won both rounds)

The afternoon meal included grilled chicken, corn on the cob, salad, mac and cheese, and a fruit and fresh cream dessert. The kids had hotdogs and chips in addition to anything that they wanted from the adult menu. Row was sneaky lucky and had about four small orange sodas before any parental units figured it out...but it was a "special occasion." We try to limit the soda intake for the kids to only special occasions, and for myself, I try to limit one per day.

The rest of our weekend will include church, painting, and cleaning. Oh, and we are going to see Despicable Me 2 on Sunday as a treat for the boys. This is Ant's third time to go to the movie theater, but Row has been quite a bit.

While we aren't putting away food, practicing our outdoor skills, or prepping. We are building something more important - memories.